Mount San Jacinto is the second highest mountain in southern California, rising 10,834 feet (3,302 m) above the shrub-studded desert below. The trail leading to the mountain peak extends 11 miles (17.7 km) through wilderness with the last stretch rising rapidly in elevation. From the boulder-strewn peak, one observes a peerless, expansive view, encompassing San Gorgonio Pass, the Pacific Ocean, the Colorado Desert, and lands in Mexico. This unique region is rich in biodiversity, home to hundreds of native plant species, and numerous threatened or endangered animal species (Cantu et al. 2002). The mountain is located within the 12,465-acre (5,044 ha) Mount San Jacinto State Wilderness, which was established in 1974.

In California, state wildernesses can be “established within the boundaries of other state park system units” (California State Parks 2010, p. 110), and Mount San Jacinto State Wilderness is housed within the larger Mount San Jacinto State Park (Figure 1). Propst and Dawson (2008) explained: “State-owned wilderness areas is a category of wilderness that can be confusing and, at times, misleading as to whether an areas is wilderness in name only or by objective criteria and legal designation” (p. 19). In California, however, state wilderness areas are established by both objective criteria and legal designation, and are managed to protect and preserve the area’s natural conditions, which include four conditions very similar to those in the U.S. Wilderness Act such as “appears generally to have been affected primarily by the forces of nature, with the imprint of man’s work substantially unnoticeable” (California State Parks 2010, p. 110).

Federal wilderness lands border Mount San Jacinto State Wilderness. Both California and the Wilderness Act of 1964 define wilderness as “areas where the earth and its community of life are untrammeled by man and where man himself is a visitor who does not remain” (California State Parks 2010, p. 110; USDA Forest Service 1975, p. 29). Although side-by-side, the federal and state wildernesses are managed by separate agencies, and the visitor usage policies differ between the areas. For example, in the nearby federal wilderness areas visitors can camp in one of five camping zones, whereas state wilderness visitors must camp in designated camping sites.

The complexity of visitor access confounds the unique situation of Mount San Jacinto State Wilderness. Most visitors (an estimated 97.6% in 2008) access the wilderness area via the Palm Springs Aerial Tramway, which transports customers 5,873 feet (1,790 m) from the desert floor to its mountain terminus. The Palm Springs Aerial Tramway provides easy access to the wilderness area, and high-elevation hikers encounter an uncommonly high number of day visitors. Park visitation is increased during weekends and summer. During summer months, the wilderness camping areas often reach the established occupancy limits and numerous potential campers are turned away.

Manning (2011) states that “agencies have an obligation to manage parks and related areas to meet the needs of society, and these agencies are ultimately subject to sanctions (e.g., public disapproval, legal challenge) if they are perceived to fail to live up to this obligation” (p. 190). In fact, in their analysis of state wilderness areas, Propst and Dawson (2008) developed six criteria to evaluate these wildernesses, which include “development of management plans to formally define area objectives and to guide managers in activities and decision making that fosters those objectives” (p. 20). In an effort to maintain quality visitor experiences and uphold ecological integrity, management of the Mount San Jacinto State Wilderness requested an investigation of wilderness use and visitor information to assist in the formation of management policies, resource protection, and planning. This article discusses the assessment of Mount San Jacinto State Wilderness and visitor attributes, visitor attitudes and preferences, and visitor perceptions of environmental and social impacts.

Visitor attributes provide a glimpse into the behaviors and characteristics of wilderness users. Watson et al. (2000) define visit attributes as “relevant characteristics of visits” (Watson et al., p. 9). Such information may include the length of stay, group size, travel method(s), temporal and spatial use distribution patterns, or activity participation. Visitor attributes describe the “traits characterizing wilderness visitors” (Watson et al., p. 9). This may include information such as race, gender, education, income, or past wilderness experience and knowledge.

Visitor attitudes and preferences consider visitors’ opinions, both positive and negative, about specific recreation areas or activities, as well as particular management issues and actions. Understanding visitor attitudes and preferences is particularly important when visitors are dissatisfied, experience recreation conflict, or engage in problematic behaviors (Lucas 1987; Needham and Rollins 2009). 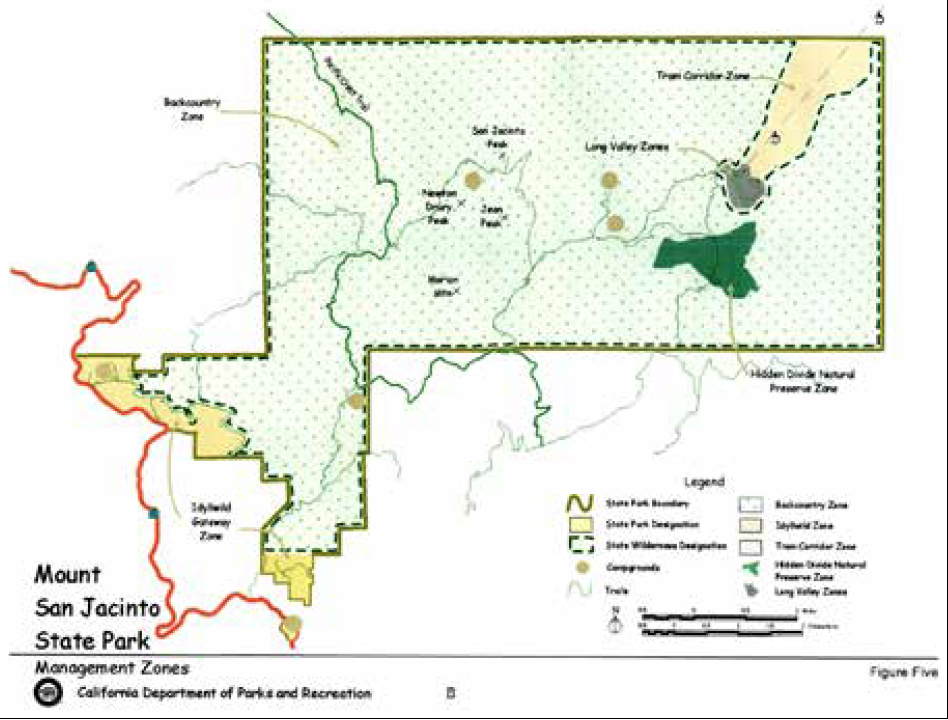 The research protocol for this study was developed in conjunction with the state park management to examine aspects of wilderness use that the park management found most pressing. Data collection occurred over four randomly selected weekends during the months of July, August, and September in 2008, which were identified by park management as periods of high visitation. During these weekends (Friday to Sunday), eight separate four-hour contact periods were randomly selected during which researchers invited wilderness area visitor groups who passed through the Long Valley Ranger Station, located within the Mount San Jacinto State Wilderness (MSJSW), to participate in this study. All visitor groups, whether they were entering and exiting the MSJSW, were invited to participate. In this way, probability sampling was employed to obtain a sample representative of wilderness area visitors. 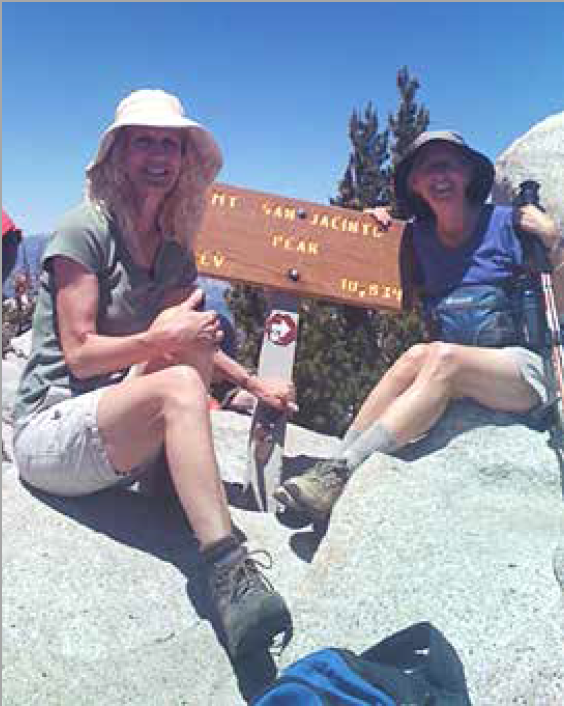 Researchers used Compaq’s Ipaq PDA (2006) to conduct the interviews and to collect data. Utilizing the handheld PDAs enabled efficient and paper-free data collection as the researchers read each question aloud and recorded participant responses. Completed questionnaires were uploaded from the PDA unit to a web-based survey and questionnaire software. Once data collection was completed, the data was transferred to the SPSS (2008) for data analysis.

The majority (76.2%) of respondents were day-use visitors, and all but three obtained the required day-use permit. The average number of hours spent in the wilderness area was 4.7 hours. All study participants hiked between 1 and 36 miles (Figure 2). Although most participants reported hiking approximately 5 miles (the mode) during this visit, a substantial number of participants (36.9%) hiked more than 10 miles. Participants most frequently reported using the following trails: Round Valley Loop (88.9%), Mount San Jacinto Peak Trail (47.0%), Wil-low Creek Trail (12.8%), and Pacific Crest Trail (3.4%). 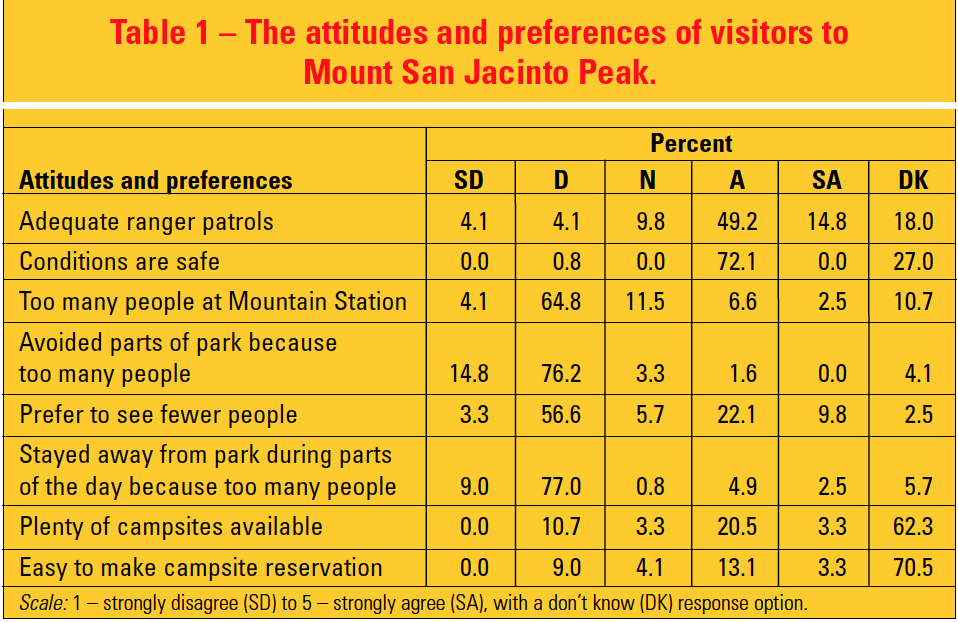 Those who did stay overnight (28%) spent a mean of 1.8 nights in the wilderness with all but one subject having obtained the required over-night permit. Participants reported using the following camping areas: Round Valley (65.5%), Tamarack Valley (24.1%), Little Round Valley (13.8%), and Strawberry Junction (6.9%).

Respondents did not perceive any of 16 potential environmental and social impacts to be a problem (Table 2). Negative environmental and social impacts were noticed by more than 10% of participants, including noise of others (15.6% slight to big problem); litter along a trail, campsite, or picnic area (13.9% slight to moderate problem); encountering larger groups on a trail (13.1% slight to moderate problem); and restrooms that needed cleaning (13.1% slight to big problem). Of the 64 participants who hiked to the peak and could respond to this item, 17.2% perceived that there were too many people on Mount San Jacinto Peak.

Visitors were asked whether they noticed any of 14 environmental conditions within the park (Table 3). Participants indicated that they noticed side trails, worn trails, trail erosion, downed trees, as well as tree root exposure and vegetation loss on trails.

Overall, the wilderness visitors’ ratings of attitudes, preferences, and perceptions for nearly all conditions and issues measured indicate that visitors have low levels of dissatisfaction in regards to Mount San Jacinto State Wilderness. Nearly all participants accessed the area by way of the Palm Springs Aerial Tramway and had previously visited the park only a few times. Since most respondents reported that they were married, white, highly educated, averaged 46 years of age, and were from California, they are similar to many federal wilderness visitors throughout California (Chavez 2001). However, Mount San Jacinto State Wilderness visitors differ from other wilderness visitors as they have considerably high levels of income. This may be in part due to the park’s location with relatively easy access from southern California, one of the wealthiest regions of the country. 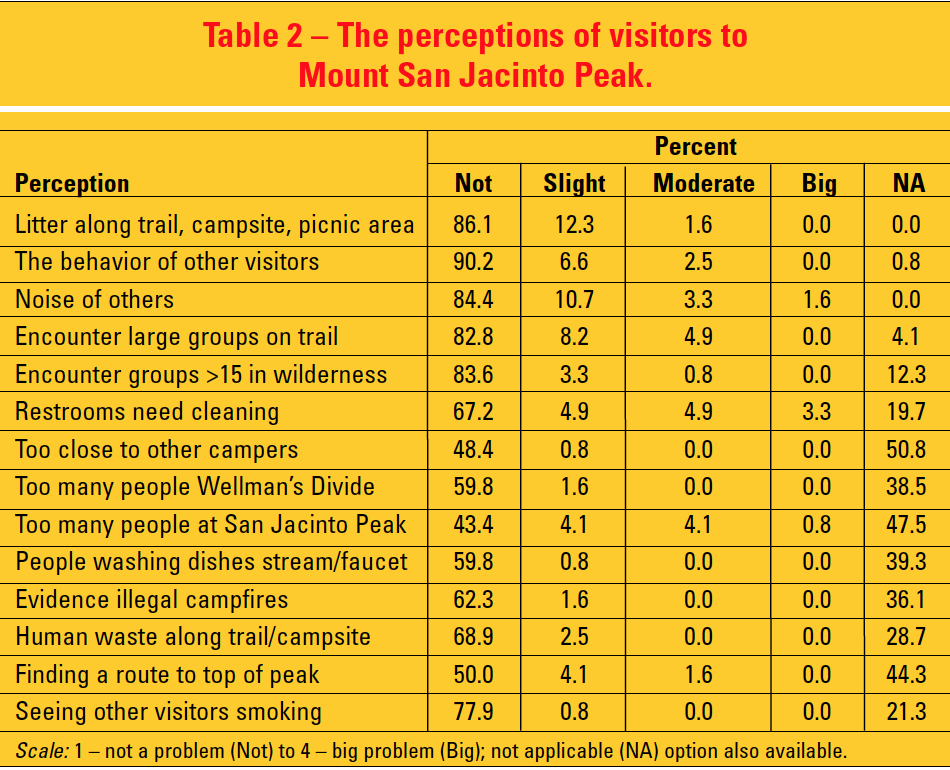 The attitudes and preferences expressed by the participants indicate that visitors are not greatly dissatisfied with park and wilderness area conditions. Additionally, participants express feeling safe in the park. Although a substantial percentage of participants (31.9%) would prefer to see fewer people during their visit, participants disagreed with statements indicating that the park is crowded or that they were displaced because of crowding. These results may reflect that the majority of the study participants were day users.

Participants noticed several negative environmental (condition of the trails) and social impacts (noisy visitors, litter, large groups, restrooms needing cleaning, too many people at the peak). However, participants still reported low levels of dissatisfaction. Manning (1999) refers to the cognitive dissonance theory when hypothesizing that as “recreation activities are voluntarily selected and sometimes involve a substantial investment of time, money, and effort, some people may rationalize their experience and report high levels of satisfaction, regardless of conditions” (p. 97). Although this study focused on visitors’ levels of dissatisfaction rather than satisfaction, the cognitive dissonance theory may also be helpful when considering these visitors’ experiences. 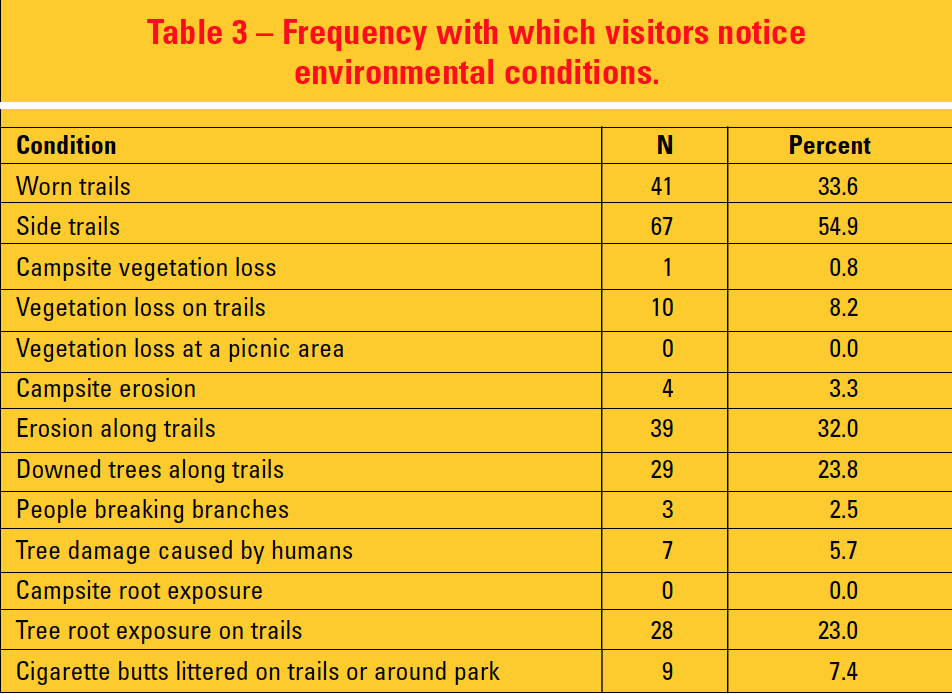 Previous wilderness research measuring perceptions of visitors and managers found that visitors often do not perceive environmental conditions the same as wilderness managers (Shin and Jaakson 1997; Watson et al. 1998); however, visitors to Mount San Jacinto State Wilderness have reported that they noticed some undesirable trail conditions that might require attention. In addition to increased trail maintenance, educational programs that emphasize reducing impacts to resources may help address some of the environmental and social impacts (e.g., Leave No Trace education programs). 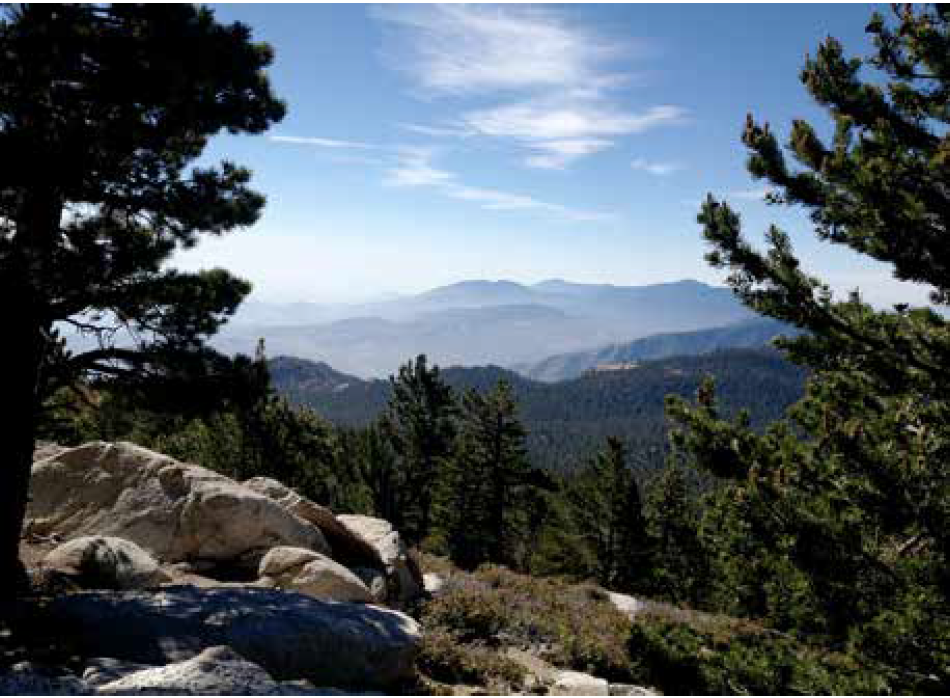 During interviews for this study, many participants expressed surprise when learning of a designated state wilderness area, since the main purpose of their trip was to ride the Palm Springs Aerial Tramway for the scenic views (Figure 3) rather than visit the wilderness. The attitudes, preferences, and perceptions of primary purpose wilderness visitors are expected to be different from the needs of the accidental visitors to wilderness. Future research at Mount San Jacinto State Park and Wilderness should attempt to survey visitors who enter the wilderness without taking the tram and those who have a primary purpose to visit wilderness.

[USDA] U.S. Department of Agriculture Forest Service. 1975. A Summary of the Program and Assessment for the Nation’s Renewable Resources.