When E. O. Wilson called for half the world to be left in a natural state (Wilson 2016), there was widespread disbelief that such a thing was possible. But while theoreticians argue about the details, one country has quietly exceeded the target: Bhutan has set aside 51.44% of its total land area as permanent protected areas. This article discusses Bhutan’s conservation strategy, describes a recent assessment of the effectiveness of the country’s protected area system, and looks at what lessons the rest of the world can and cannot draw from the actions of this tiny Himalayan country.
Bhutan is a small, landlocked  Buddhist  country, lying between India and China, in the Eastern Himalayas (Department of Forest and Park Services 2016). The country is blessed with a range of ecosystems, ranging from lowland tropical forests to some of the highest mountain ecosystems in the world. Around three-quarters of the country is forested (Gilani  et al. 2014), and the government is committed to maintain forest cover of at least 60%. This is further enshrined in the Constitution of Bhutan, and the country also pledged to remain carbon neutral in perpetuity at the Paris Climate Declaration. There is a rich biodiversity with more than 200 mammal species, including 27 globally threatened species; more than 760 birds, including 60%  of the world population of the critically endangered white- bellied heron (Ardea insignis) (Ministry of Agriculture and Forests 2014); and a huge array of flowering plants, including many endemic species. Baseline survey of species is still ongoing, and new species are recorded as new areas within the country are explored. Important species include the red panda (Ailurus fulgens fulgens), blue sheep (Pseudois nayaur), Tibetan wolf (Canis lupus chanco), takin (Budorcas taxicolor whitei), Asian elephant (Elephas maximus), gaur (Bos gaurus), Asiatic golden cat (Catopuma temminckii), Himalayan serow (Capricornis sumatraensis), musk deer (Moschus chrysogaster), clouded leopard (Neofelis nebulosa), tiger (Panthera tigris tigris), and snow leopard (P. uncia) (Ministry of Agriculture and Forests 2014). The National Tiger Survey of 2014–2015 recorded 103 tigers in Bhutan (DoFPS 2015), and 96 snow leopards were recorded from the nationwide snow leopard camera trap survey of 2015–2016 (DoFPS 2016). Bhutan is the first among the 12 snow leopard range countries to have completed a nationwide snow leopard survey. 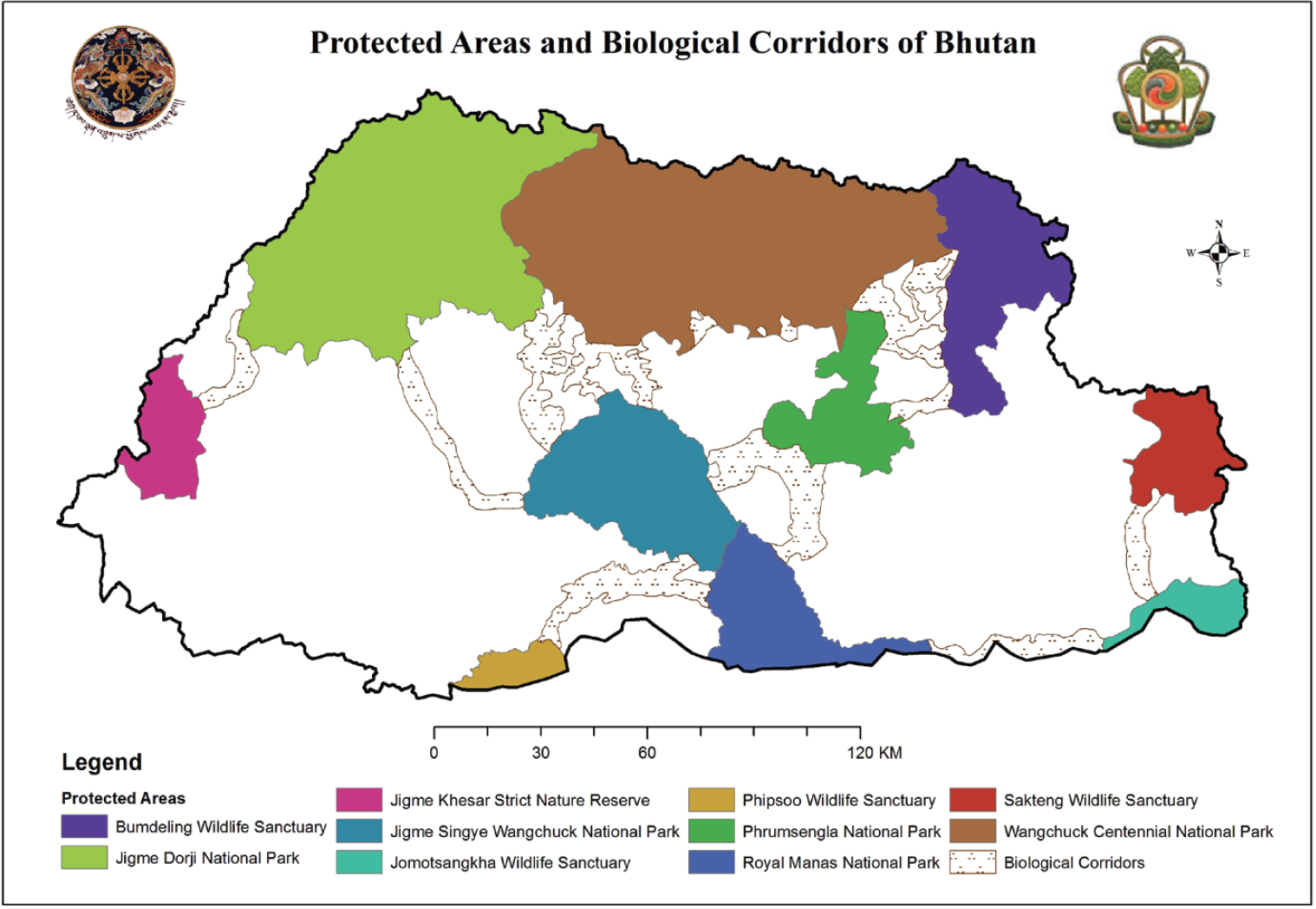 Bhutan has a number of unique features that help lay the groundwork for conservation success. The human population is less than 800,000 and only 8% of the area is suitable for agriculture, meaning that the large majority  of  people  (an estimated 87%) are dependent  on natural resources, including non-timber forest products (Ministry of Agriculture and Forests 2016). More than half the population live inside or near protected areas: the small number of people means that there are still large “empty” areas within parks; however, there has never been an attitude that assumes setting up a protected area means expelling the inhabitants. There is also low visitor pressure, although this is slowly growing. Visitor numbers are controlled through the national policy (Bhutan 2020) of low-volume, high-value tourism. Most tourists focus on cultural or religious sites, and large parts of the protected areas system are effectively left alone with the exception of the famous Snow Man Trek, which is attempted by many and considered to be the most arduous trekking route in the country.

Protected area managers work closely with park residents through a decentralization process that was introduced by the Fourth King Jigme Singye Wangchuck in 1974, which is one key reason behind the conservation success of Bhutan. Agriculture is the dominant livelihood practice, and most people depending on agriculture live in rural areas within or near protected areas (Figure 2). Of critical importance here is a government decision in 2004 to legalize collection of Cordyceps fungi, which is highly valuable as a medicine and under national park legislation is confined to park residents collecting under a highly controlled system. In this manner, the protected area system ensures sustainable management  of a valuable non-timber forest product (NTFP) and keeps the monetary rewards within local communities. Until recently, poaching pressure had also remained low, allowing the survival of iconic species such as the tiger and snow leopard, which have suffered heavy losses in similar habitats elsewhere in the region. 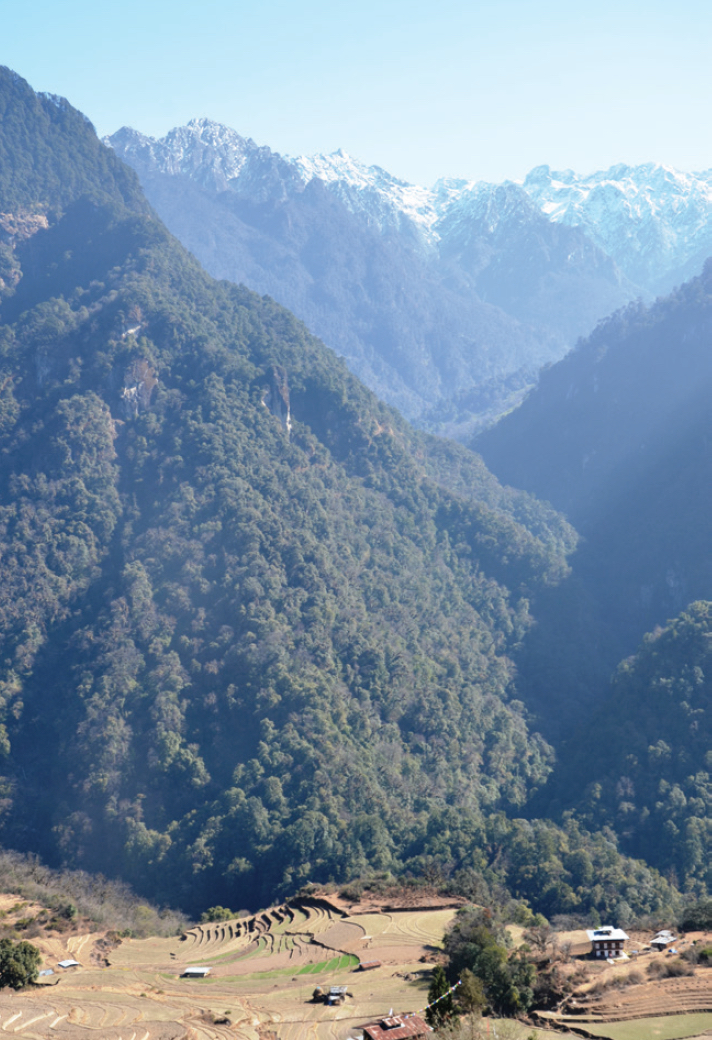 Bhutan is also a deeply religious society, and Buddhist philosophy helps to shape attitudes toward other species and sets the philosophical foundations for conservation (Higgins-Zogib et al. 2011). Several of the highest peaks are off limits for climbers due to their sacred values, so the concept of setting aside areas for their intrinsic values thus pre-dates modern protected area practice and is deeply rooted within society. Regard for the sanctity of life also means that human-wildlife conflict, particularly crop-raiding by wild boar, although recognized as a serious problem is not particularly blamed on conservation.

How Effective Are Bhutan’s Protected Areas?

There have been several attempts to assess the effectiveness of Bhutan’s protected area system, starting with application of the Rapid Assessment and Prioritization of Protected Area Management methodology in 2003 (Tshering 2003). In 2015 and 2016, the Department of Forest and Park Services carried out an assessment of all 11 protected areas, using a modified form of the WWF Management Effectiveness Tracking Tool developed during workshops in Punakha and Lamperi. Lamperi meeting participants representing all the country’s protected areas collectively developed, refined, and agreed upon the best methodology in the Bhutan context – the Bhutan METT Plus 2016 (Dudley et al. 2016) – and then carried out the assessment. Results were verified in many of the protected areas through sites visits and interviews with local community representatives. 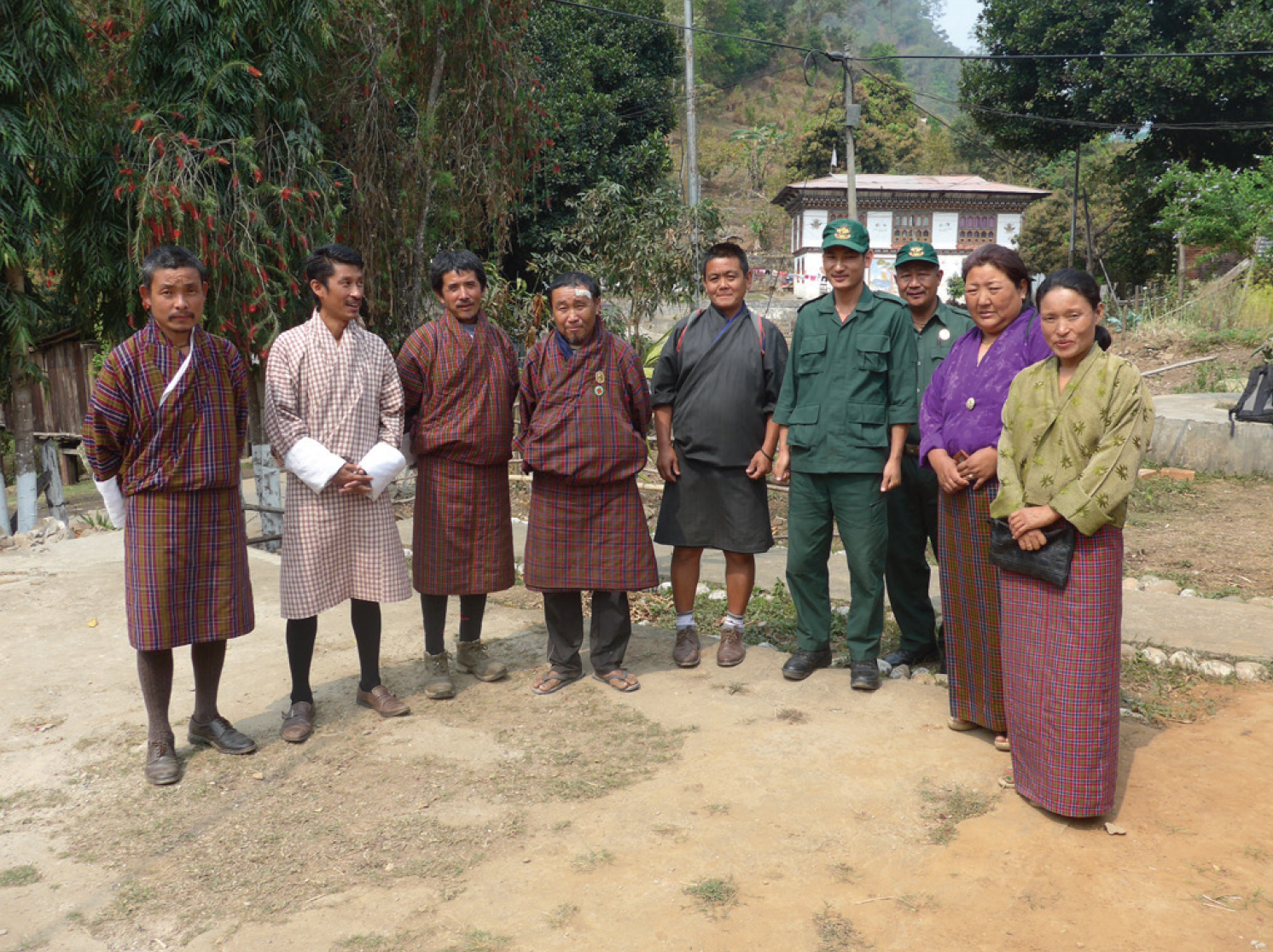 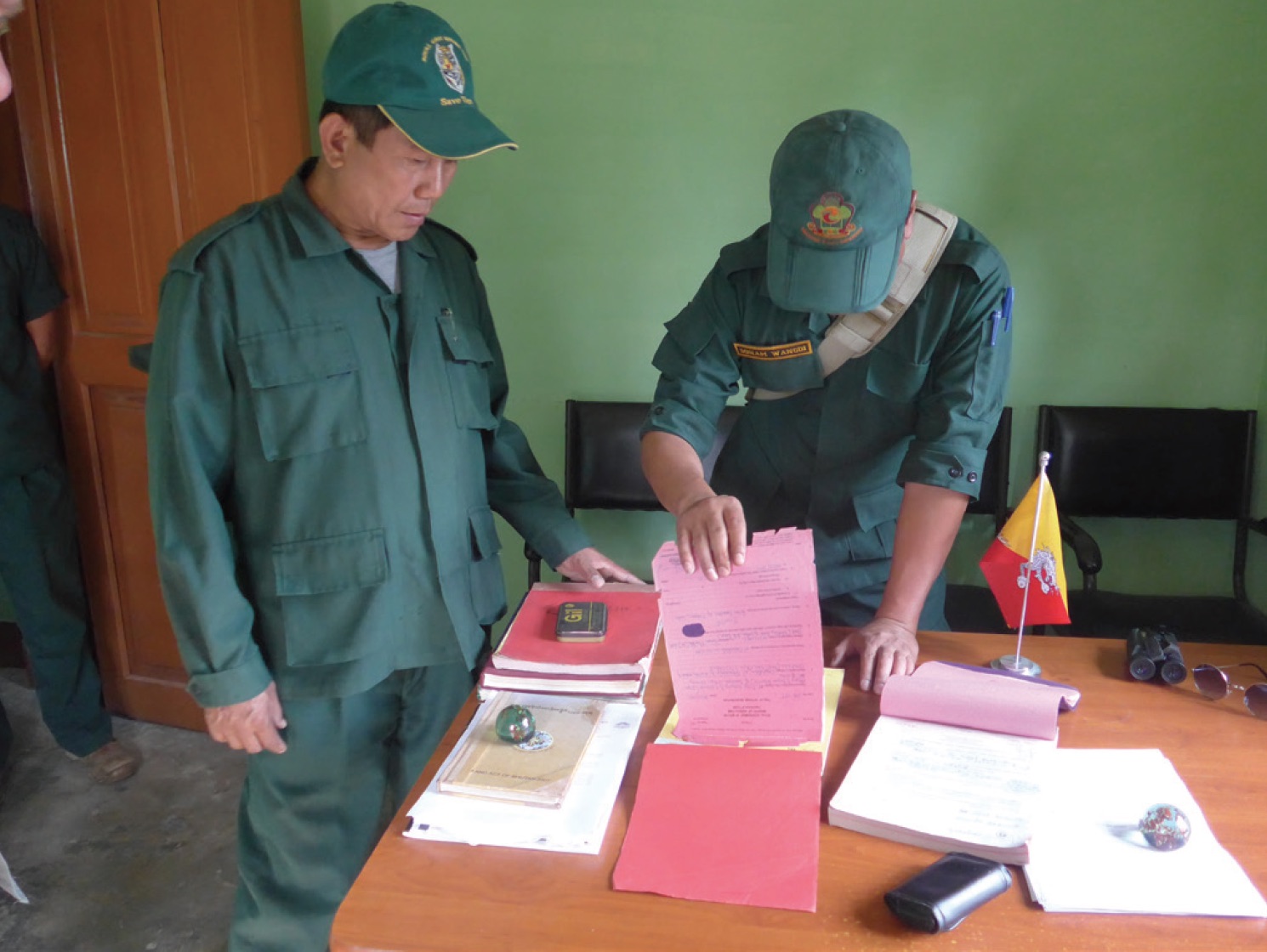 The overall results show that protected areas in Bhutan are well managed. However, effectiveness is currently limited by a low level of resources (both financial and technical) and by gaps in the monitoring and research data, which limits the ability to undertake adaptive management in response to changing pressures (DoFPS 2016).

The network of protected areas is extensive and representative (Figure 1), and there is generally a good understanding about conservation. All protected areas are legally designated and have management objectives. Threats are understood and stakeholder relationships well developed. Most protected areas have management plans, although two parks that have only recently been put into operation are still at the planning stages. Biological corridors have been designated, but implementation is not really taking place due to temporary constraints. Plans and budgets tend to focus on the most urgent needs, such as the current rollout of the SMART anti-poaching information system and human wildlife conflict management.   Although budgets are believed to be stable, the level of resources is insufficient for effective management given the size of the network and the challenges of working in such difficult physical conditions. Most regular activities (e.g., patrolling, Cordyceps management, budgeting, and community engagement) are implemented, but it is not clear that managers and staff will be able to cope with the likely increased demands on management in the future. While it is believed that management is producing good conservation results, outcome data are limited. Survey work for tiger and snow leopard suggest protection is effective, but most species are not systematically monitored (Ministry of Agriculture and Forests 2016).

In short, management is generally good, although often underresourced. A planned major funding initiative, Bhutan for Life, is expected to address the partial funding gap. This is important as pressures are likely to increase in the future, particularly from anthropogenic pressures and climate change. To some extent the protected area service is performing well because there have not been any serious threats, but this may well change.

What Does Bhutan Tell Us about Attainment of the Nature Needs Half Proposals?

Skeptics tend to dismiss Bhutan  as  a special case: a largely uninhabited, uninhabitable, and underpopulated country with a unique set of social and cultural conditions that allow the government to designate a huge protected area system. And there is justification for caution. It is hard to imagine either of Bhutan’s massive neighbors (India and China) finding space to set aside half their countries, for instance. But neither is it enough to write Bhutan off as irrelevant to wider discussions about protected areas. Five critical factors can be identified that contribute significantly to success indicators and are all transferable to any other country.

First, and perhaps most important, Bhutanese protected areas are established in collaboration with rather than in opposition to local communities, who continue to live in the area and who continue – in a sustainable manner – to make use of the area’s natural resources (Figure 3). Opposition to protected areas is often rooted in the very reasonable concern that protection will mean loss of access to traditional uses. In some cases this may be necessary – for example, if population levels of a particular species have reached critical levels or if an ecosystem is being rapidly degraded and careful negotiations and compensation are both required. But in many other cases managed access is a win-win, as species get conserved rather than driven to extinction, and communities get access to a long-term resource.

Second, there is a clear understanding of the values of protected areas and their ecosystem services, both at a national level (Kubiszewski et al. 2012) and at the level of individual communities living in and around protected areas. Where people do not understand the wider values of natural ecosystems, protected areas tend to be perceived as a straight choice between wildlife and people, and whether we like it or not, many people do not choose wildlife. Once there is recognition that a wider set of values exist, the pool of supporters grows to include a wider proportion of the population.

Next, there is strong political support from the government. Bhutan is not only unique in the amount of territory it has placed into protected areas but also that all the protected areas are government protected areas. Most other countries have a mixture of community, private, and state governance. Unequivocal government support for conservation is not drawn just from ethical reasons, although these undoubtedly exist,  but  also  for pragmatic reasons relating to a range of ecosystem services, including particularly NTFPs, water, and carbon storage. The founding architecture of Bhutan’s intact environment has been exemplified through a network of protected areas and biological corridors by the great and visionary Fourth King Jigme Singye Wangchuck and is further envisioned and strengthened through the glorious reign of King Jigme Khesar Namgyel Wangchuck.

A fourth important consideration is that protected area staff are predominantly young and enthusiastic. Managers all have tertiary educational qualifications – many have studied abroad and have brought back wider international perspectives – and there is high motivation (Figure 4). Protected areas are only as good as the people who manage them, and good relations built up over years can be lost if someone makes a bad decision or adopts policies that alienate local people.

Last, successful management means being able to prove that conservation works. Support from communities, donors, and governments will dissipate if conservation is failing. Bhutan is making progress although much more can be achieved… The recent tiger and snow leopard surveys are important in showing the strength of the protected areas system, and in encouraging major donor initiatives such as Bhutan for Life. Cordyceps monitoring is recognized to be important, but monitoring of many more species and habitats is needed in the future.

In short, Bhutan has already achieved a level of protection that most countries argue is impossible. While a set of particular conditions makes this easier to achieve than in many other cases, it is not enough to simply dismiss the Bhutan case as an anomaly. Good community negotiations, an inclusive approach, understanding of ecosystem service values, a supportive government, well-trained and well-motivated staff, and a good understanding of success and failure have all helped Bhutan achieve this important target. These preconditions could be available in many, if not most, other countries.

SONAM WANGCHUK and DECHEN LHAM work for the Nature Conservation Division of the Department of Forest and Parks Services in the Ministry of Agriculture and Forests of Bhutan.

———. 2016. Bhutan State of Parks 2016. Department of Forest and Park Services, Ministry of Agriculture and Forests, Royal Government of Bhutan.