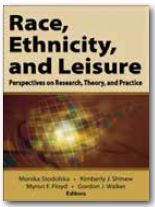 Race, Ethnicity, and Leisure: Perspectives
on Research, Theory, and Practice

For decades, wilderness and other land management agency leaders have been aware of the lack of minority visitors in wilderness settings. For example, in the United States, an Outdoor Recreation Resources Review Commission report noted in 1962 the lack of African Americans’ participation in outdoor recreation; early wilderness research in the 1960s and 1970s also highlighted the preponderance of young, male, white wilderness users. However, it didn’t seem to be until the mid-2000s, when protected area agencies became aware of systemic declines in visitation in most protected area systems, that agencies began to more deeply consider the impact of the lack of use – and thus perhaps public and political support – from the growing numbers of minority populations in many countries.

Race, Ethnicity, and Leisure, a textbook geared for undergraduates, is an outstanding overview of racial and ethnic issues edited by four major researchers in this field. The purpose of the book is “to provide a comprehensive overview of the existing research on leisure behavior of ethnic and racial minorities – the core theories, concepts, and research findings that have advanced understanding of how race and ethnicity affect individuals’ daily lives, their use of leisure resources, and the provision of leisure services” (p. 2). A key strength of this text is having both American and Canadian content integrated in most chapters. While research is assessed from leisure studies in general, a considerable number of findings are taken
from wilderness and outdoor recreation. Most chapters review existing research, highlight theoretical approaches taken, and identify future directions for research.

There are five sections in the text. Part I reviews theories, methods, and practice in leisure research on race and ethnicity. Floyd and Stodolska’s first chapter provides an excellent overview of the many theories used to describe how race and ethnicity influence leisure activities. They note that, until very recently, historic racism and discrimination was largely absent in these theories, and that other methodologies (e.g., cultural and literary studies) could be used to further construct and deconstruct minority lived experience (which the second book reviewed here attempts).

As noted earlier, Black Faces, White Spaces, based on the author’s PhD dissertation, is a good example of recent research using new approaches and tools to reexamine racial and ethnic differences in the perception and use of wild nature. Finney has two goals: (1) to “lay out a rendering of the African American/environmental relationship that reveals some of the contradictions and synergies, and (2) equally attribute the knowledge that comes from nonacademic sites of learning as central to our understanding of the African American environmental relationship” (p. xvi). For the latter goal, she uses cultural studies, critical race theory, and her own experiences of being an African American woman “to engage the complexities and contradictions” (p. xvii) in this topic. Finney conceives a “white wilderness” as socially constructed, and suggests that “whiteness, as a way of knowing, becomes the way of understanding our environment, and through representation and rhetoric, becomes part of our educational systems, our institutions, and our personal beliefs” (p. 3). The book integrates relevant literature from cultural and critical theory studies, together with original data from interviews that attempted to answer three questions: “(1) how African American participation is perceived by environmental organizations; (2) how African Americans actually experience the natural environment; and (3) what insights we can gain into the organizations that manage these environments” (p. 13).

African American history is reviewed, suggesting “the memory of slavery and segregation has manifested … in the form of an emotional residue that has the capacity to be a roadblock in the pursuit of healthy human/environment relationships” (p. 50). The next chapter highlights the importance of collective memory in allowing “for more control and power in deciding (collectively?) who we were and who we are” (p. 66). The impacts of stereotypes and the racialization of the outdoors as white spaces are also examined: “The lack of visual and textual representations of African Americans in popular media and the national parks” (p. 90) (together with their limited visibility in environmental movements) is created by both these forces. The impact of racism – the  systemic force embedded in all institutions (including wilderness and other protected areas) – is reviewed, and questions the unwillingness of agencies to consider the “structural racism embeded in our way of life” (p. 105). While the lack of theoretical stances and much of the leisure and outdoor recreation research reviewed in this text is unfortunate, Black Faces, White Spaces does provide a unique perspective that is much needed in examining the deficit of one minority group’s use of wilderness and other natural areas.