CONFESSIONS OF A RECOVERING ENVIRONMENTALIST AND OTHER ESSAYS 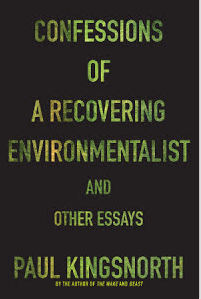 When asking graduate students which environmental public intellectuals I should read, Paul Kingsnorth’s name is frequently mentioned (along with George Monbiot, Rebecca Solnit, and Terry Tempest Williams). Kingsnorth is a longtime activist, Man Booker prize–nominated author, and former deputy editor of the Ecologist. Confessions is an enjoyable, easy-to-digest collection of his work published over the last 10 years.

As the title would suggest, Confessions traces a gradual disillusionment with the environmental movement. The hard truths that Kingsnorth tells of include a single-minded obsession with climate change, an environmental movement focused on admittedly important humanist and social justice concerns, and the neo-environmentalists such as Peter Kareiva (formerly chief scientist of The Nature Conservancy), Emma Marris, and the folks at the Breakthrough Institute. The green movement, Kingsnorth suggests, has become utilitarian and self-congratulatory in their embrace of technology, sustainable development, and ethical consumption:

We are not environmentalists now because we have an emotional reaction to the wild world…. We are environmentalists now in order to promote something called “sustainability.” What does this curious plastic word mean? It does not mean defending the non-human world from the ever-expanding empire of Homo sapiens, although some of its adherents like to pretend it does, even to themselves. It means sustaining human civilisation at the comfort level that the world’s rich people – us – feel is their right, without destroying the “natural capital” or the “resource base” that is needed to do so. (p. 68)

Much like Edward Abbey and Gary Snyder, Kingsnorth targets growth-for-the-sake-of-growth as the more important cause for concern. With an unfailing optimism that human ingenuity and resourcefulness will find ways to only continue human dominance and progress, many environmentalists now seem little different from big governments and large corporations:

This approach has left environmentalism in a position where its advocates now find themselves unable to do anything but argue about which machines they would prefer to use to power an ever-growing industrial economy. (p. 47)

One target of disappointment for Kingsnorth is those like Stewart Brand, who in the face of the supposed Anthropocene, suggest, “We are as gods, and HAVE to get good at it” (Whole Earth Discipline, 2010, p. 1). Kingsnorth worries that, as captains of the planet, we treat and deplete the resources of the Earth such that we must then turn to the heavens. But, he suggests, that a “Mars-based future, like the future in which we rebuild passenger pigeons in laboratories, breed babies in machines and download our consciousness into silicon chips, is an exercise in space-age Romanticism” (p. 39).

Paul Kingsnorth follows in the tradition of Emerson and Thoreau, calling for a simplicity of wants, a humility and forbearance, and an embrace of the joys and wonders of nature. He suggests that “living without wild nature is like living without one of our senses or one of our limbs” (p. 57). Confessions is a well-written, well-considered, and compelling collection. Kingsnorth’s is a voice well worth giving attention to.