Abstract: The southern ground hornbill (SGH) is a tourism flagship and yet vulnerable avian species, currently decreasing in most of its African wild range due to anthropogenic causes. SGH’s status and associated threats were investigated in core habitats of the expansive Kafue National Park (KNP) and its surrounding Game Management Areas of Zambia. Using data from a Systematic Reconnaissance Flight sampling method and Management Effectiveness Tracking Tool for Protected Area Systems, the study established that KNP supported about half of the SGH population (47.73%, n = 2112) within the Kafue ecosystem due to mitigation of anthropogenic disturbances such as uncontrolled fires, human encroachment (e.g., settlements and mining), and deforestation from agrarian and timber harvesting chores. KNP had most of the breeding pairs in the ecosystem (57.14%, n = 80). It is recommended that wild areas protection through law enforcement, integrative land-use practices, and conservation awareness be strengthened for enhanced SGH stewardship.

The southern ground hornbill (SGH) (Bucorvus leadbeateri), plays major ecological and socioeconomic roles in the wild. It is a keystone species and effective seed disperser that contributes to ecological succession processes (Holbrook and Smith 2000). Based on its large charismatic-sized body (Figure 1), it serves as a tourism flagship species for biodiversity conservation and acts as a bioindicator for savannah biomes (Engelbrecht et al. 2007; Verissimo et al. 2009). The SGH is found in a number of habitats such as woodlands, savannah grasslands, and farming landscapes (Leonard 2005; Engelbrecht et al. 2007). It was previously abundant across its geographical ranges of eastern and southern Africa prior to 2011 when it was declared a species of regional conservation concern (Leonard 2005; Trail 2007). Populations have been waning in much of its range, and it was later declared a vulnerable species by the International Union for Conservation of Nature (IUCN) (Birdlife International 2015).

The SGH decline is attributed to a combination of biological and environmental factors. Biologically, its population is limited by low reproductive rates (Kemp and Begg 1996; Coetzee et al. 2014), and the need for large range areas in excess of 100 km2 (1,076 ft.2) per flock (Theron 2011). Although population viability is enhanced by cooperative breeding tendencies in SGH, where alpha breeders raise young in collaborative action with other family members, only one of the two to three hatched chicks in an egg clutch survives starvation before fledging (Kemp and Kemp 1991). Environmental factors such as deforestation affect breeding processes, as the SGH is a tree cavity breeder (Kemp and Begg 1996; Trail 2007). African elephants (Loxodonta
africana) also destroy trees used by nesting birds (Vogel et al. 2014). Climate variability and change expressed by extreme weather events such as floods and drought may also negatively affect availability of forage and cavity trees (Pounds et al. 1999; Myers et al. 2000; Sinervo et al. 2010).

Several SGH studies have been conducted in African ranges such as South Africa, Lesotho, Swaziland, Kenya, and Tanzania, where its vulnerability to extinction has been attributed to habitat fragmentation, disturbance, and cultural persecution (Hulley and Craig 2007; Coetzee et al. 2014). However, the status of the SGH remains largely unknown in its presumed stronghold and epicenter, Zambia (Birdlife International 2015). Globally, scientists lack detailed distribution and abundance data for most species of conservation concern (Andelman and Fagan 2000). Both its expansive ranges and the fact that it is a low-density species pose practical difficulties for SGH inventories, resulting in a dearth of information on its occupancy and abundance in much of its ranges. The purpose of this study was to ascertain the SGH status in Kafue National Park (KNP) and the associated threats, relevant for conservation interventions targeting SGH as a keystone and flagship species.

The study was conducted in the expansive Kafue National Park (22,480 km2/8,679 ft.2) and its adjacent areas, constituting nine Game Management Areas (GMAs) (43,408 km2/16,759 ft.2) of Zambia (Figure 2). On an annual basis, KNP attracts thousands of nature-based tourists, with the SGH as part of the attraction. KNP has 11 key vegetation community types, predominantly miombo woodlands, providing habitats to more than 492 sympatric bird species (Leonard 2005; Mwima 2005). The adjacent GMAs are inhabited by more than 200,000 people, unlike KNP where human habitation is not permitted. In addition, the GMAs are multiple-use areas (e.g., agriculture, mining, and logging), exerting pressure on KNP. 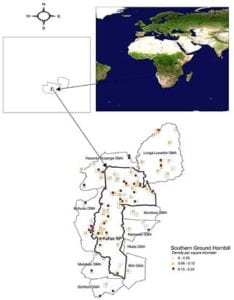 The Zambia Wildlife Authority (ZAWA) conducted an aerial wildlife survey between September–October 2011 in the KNP and its surrounding areas using a Systematic Reconnaissance Flight (SRF) sampling method described by Norton-Griffiths (1978) (ZAWA, unpubl. report). The survey period coincided with the dry season when vegetation sheds its leaves, enhancing the visibility of SGH. The survey team used a fixed-wing Cessna 206, involving a pilot, a front-seat observer (FSO-Recorder), and two rear seat observers (RSO-Observers) for bird counts over a stratified area, with transects traversing environmental features such as rivers, mountains, and vegetation types. Surveying across different environmental features accounted for variability in resources, influencing the distribution of birds (Sinclair et al. 2006). Onboard GPS (Garmin 296) was used for taking coordinates and radar altimeter was used for monitoring the flying height above ground level (approximately 100 m/109 yards). Transects were regularly spaced at distances of about 2.5–5.0 km (1.55–3.11 miles) apart, resulting in a sampling intensity of between 10–20%. Bird counts were done in subunits of 1.0 km2/10.76 feet2, representing approximately 30-second flying intervals, and constituting recording intervals.

Bird count data was analyzed based on Jolly’s Method 2 for unequal sized sample transect units (Jolly 1969). The Jolly’s Method is based on the ratio calculations accounting for wildlife seen and counted in relation to areas searched (detection probabilities), extrapolated to the strata, based on the birds’ density per sample unit (Norton-Griffiths 1978).

Threats to the SGH were assessed in the study area based on secondary data obtained from management effectiveness assessments by ZAWA (unpubl. report). The Management Effectiveness Tracking Tool for Protected Area Systems (METTPAS) (Hockings 2003; Hockings et al. 2006) was used to assess the levels of anthropogenic threats to the SGH. Based on perceived magnitude and severity, a group of 59 experienced and knowledgeable staff and stakeholders rated the threats to SGH (i.e., wildfires, human encroachment, and deforestation) in KNP and its adjacent GMAs on a scale of 0–5 (0 represents insignificant threats; 5 denotes very high magnitude, severity, or frequency in the last five years). In determining the ratings, each participant compared the associated impacts across the threats.

The core occupancy of SGH in the Kafue ecosystem (65,888 km2/25,439 miles2) lies in KNP (Figure 2 and Table 1). KNP supports nearly half (47.73%; n = 2,112) of the SGH in the ecosystem, with more than half of breeding pairs (57.14%; n = 80). Mean flock densities for KNP were higher than for adjacent GMAs (Figure 3), which had relatively greater magnitude of disturbances (Figure 4). Although much of KNP is covered by miombo woodlands, SGH were found mostly in northern and western-central areas of the park, corresponding to areas of high biodiversity, and high protection levels and less vulnerability risks. In the adjacent GMAs, SGH was mostly sighted in the miombo woodlands and closer to the park boundaries. 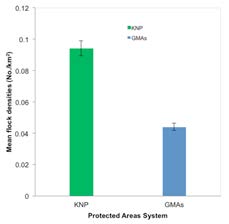 The key anthropogenic threats to SGH in KNP and the surrounding GMAs as rated by participants were wildfires, human encroachment, and deforestation, especially in the GMAs (Figure 4). Mean ratings for the combined threats differed signifi-cantly between KNP and GMAs (F (28,29)= 75.65; P ≤ 0.001), for their perceived magnitude, severity, and frequency. Due to stricter protective measures, KNP had less frequent and severe fires, marginal human encroachment, and deforestation than GMAs (Figure 4). 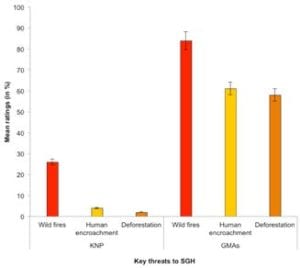 Figure 4 – Key threats to southern ground hornbill in the Kafue National Park and its surrounding Game Management Areas, Zambia, in 2011. 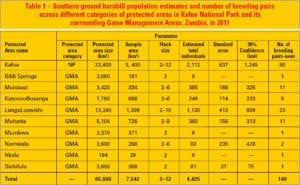 The expansive nature of KNP and its surrounding GMAs, with a variety of habitats, makes the area important for SGH conservation and nature-based tourism. The major threat to SGH in KNP is wildfires. Wildfires mostly originate from GMAs where humans use fire for activities such as agricultural land clearing, artisan mining, traditional wildlife hunting, and timber harvesting. Other sources of wildfires in KNP include wildlife poachers’ camps and lightning-ignited fires. The wildfires destroy SGH food sources such as reptiles, snails, insects, and small mammals. Further, although KNP has not been encroached or deforested on its boundaries, there are pressures and threats from settlements and agrarian activities in nearby GMAs such as Mumbwa, Bilili, and Sichifulo (Figure 1). Unplanned settlements and agricultural and other land uses such as timber harvesting are also common in the GMAs.

In the park, several mediating factors help to curb threats to SGH and its habitats. These include stakeholder conservation education, legislative and law enforcement measures such as wildlife and habitat protection, and zoning that provides stringent limits on use. These factors are in contrast to those human activities occurring in the GMAs where weak governance exists and wildlife law enforcement officers are ill-equipped and poorly funded to effectively conduct law enforcement and natural resource protection. However, the mediating factors for SGH conservation in the GMAs include supportive traditional beliefs and local community involvement in the natural resource management, each of which are still frail and in their formative stages. For example, local communities may not kill SGH on the account that it announces the start and end of rain-fed crop-farming season, and killing SGH brings forth omen on them.

The ZAWA emphasizes protected area management strategies that play a role in the survival and recovery of wildlife, especially in KNP. The management team focuses on improving its management effectiveness for KNP within its limited financial and technical resources. It also encourages broad-based local stakeholder involvement and participation in natural resource management. Given that SGH and other wildlife in KNP require large tracts of land for their survival, multistakeholder support is required for their conservation. Unlike in some geographic ranges such as South Africa where ex situ (nonfree ranging off-site original range) conservation research and conservation interventions have been extensively implemented to serve as panacea to risks of “local” extinction (Cousins et al. 2008), KNP has promoted in situ conservation, where SGH are conserved on expansive and free-ranging basis in their original range. In situ conservation is less time consuming, technically demanding, and costly (Sweeney 2010), and, therefore, affordable in the long term.

In addition to the existing management strategies, the SGH should formally be adopted as the tourism flagship species to increase management effectiveness. In recent years, in order to enhance local support for protection of wild habitats and wildlife, KNP management has embraced the local communities for self-empowerment in infrastructure and tourism development inside and outside the park via avenues such as employment creation and skills training (e.g., tour guiding). However, monitoring of the resource base, including SGH populations and their habitats, should also be prioritized by the wildlife agencies and other stakeholders.

This study was conducted under the auspices of Zambia Wildlife Authority (ZAWA). I thank Howard Frederick, Chuma Simukonda, Paul Zyambo, Chaka Kaumba, and Griffin Shanungu for their invaluable contribution to data collection.

VINCENT R. NYIRENDA is a senior lecturer in wildlife management in the Department of Zoology and Aquatic Sciences, School of Natural Resources, at The Copperbelt University, Kitwe, Zambia; email: vincent. nyirenda@cbu.ac.zm.

Coetzee, H., W. Nell, and L. van Rensburg. 2014. An intervention program based on plant surrogates as alternatives to the use of southern ground hornbills in cultural practices. Ethnobotany Research and Applications 12: 155–164.

Engelbrecht, D., N. Theron, A. Turner, J. Van Wyk, and K. Pienaar. 2007. The status and conservation of southern ground hornbills, Bucorvus leadbeateri, in the Limpopo province, South Africa. In The Active Management of Hornbills and Their Habitats for Conservation, eds A. C. Kemp and M. I. Kemp (pp. 252–266). Bela-Bela, Pretoria, RSA: Naturalists and Nomads.