In the United States, as is happening in many other regions of the world, there is an increasing respect and appreciation for the knowledge of indigenous people, and how they have lived in concert with the landscape sincef time immemorial. We have so much to learn from our Native peoples and we’re trying to unlock that. I would encourage all people from countries around the world to really tap into that indigenous knowledge to build respect in those cultures and recognize that through bio-cultural conservation we actually have an opportunity to factor that human dimension in to help all of us. – Sally Jewell, Secretary of the Interior (IUCN 2016 World Conservation Congress)

The US data available regarding Native American employment is very concerning. More than one in four Native people live in poverty, and their labor force participation rate, which measures the share of adults either working or looking for a job, is the lowest (61.6%) for all race and ethnicity groups in the United States. Despite the negative data, Native youth have significant skills that are being developed through youth corps programs. Many are beginning to carve out futures in the natural sciences and natural resource fields. Corps programs provide opportunities to serve communities and ecosystems and lead to personal and professional development. They have proven to be successful in supporting Native peoples in building a foundation for future employment and life success. This article provides an encouraging glimpse of what has been accomplished by Conservation Legacy, other youth corps programs, and our federal agencies in providing opportunities for Native youth to become engaged with the conservation movement, a field that in many ways was inspired by the ancestral beliefs and traditional lifeway practices of Native peoples. 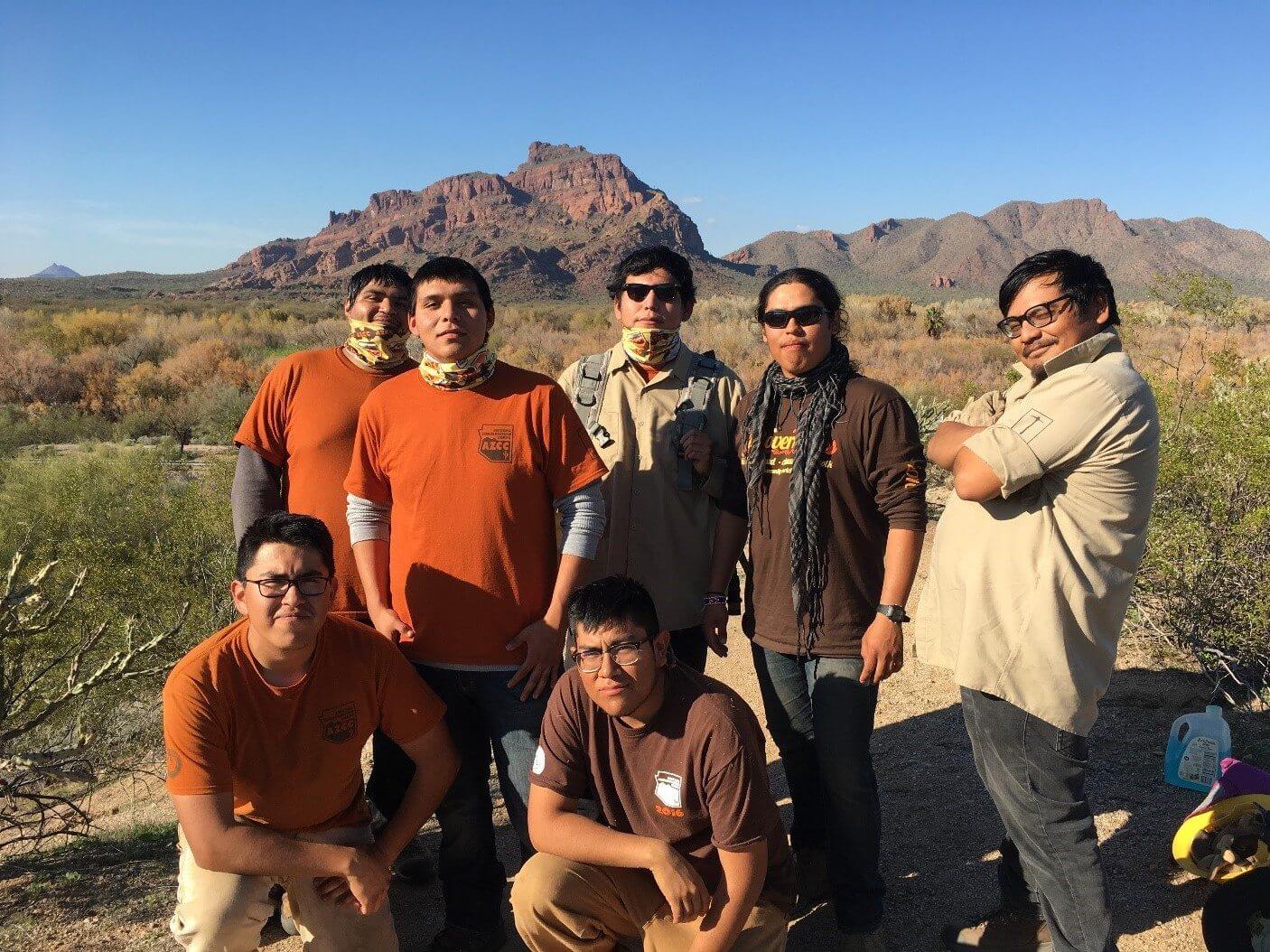 Conservation Legacy’s Ancestral Lands (AL) programming is rooted in the culture and heritage of the local tribal communities they have been successfully partnering with since 2008. The power and impact of AL Native programming is due to community investment and support for each program, both tribally and locally, combined with the network of operational support from Conservation Legacy and their devoted public land managing agency partners.

Conservation Legacy Native programs provide service, training, education, and employment opportunities for Native community members, including low income and disadvantaged youth and veterans. Each of its programs engage a diverse set of participants, reflective of their community. To date there are 18 separate AL programs operating out of three Conservation Legacy home offices throughout the United States. These programs work within tribal communities and on public lands, including wilderness and other protected areas. At least 16 individual Native VISTA positions/internships were offered by Conservation Legacy in 2017, and Conservation Legacy reports they are currently developing new programs with the Hopi, Lakota Sioux, Mandan and Hidatsa, Northern Pueblos of New Mexico, and the Kupu people of Hawaii. 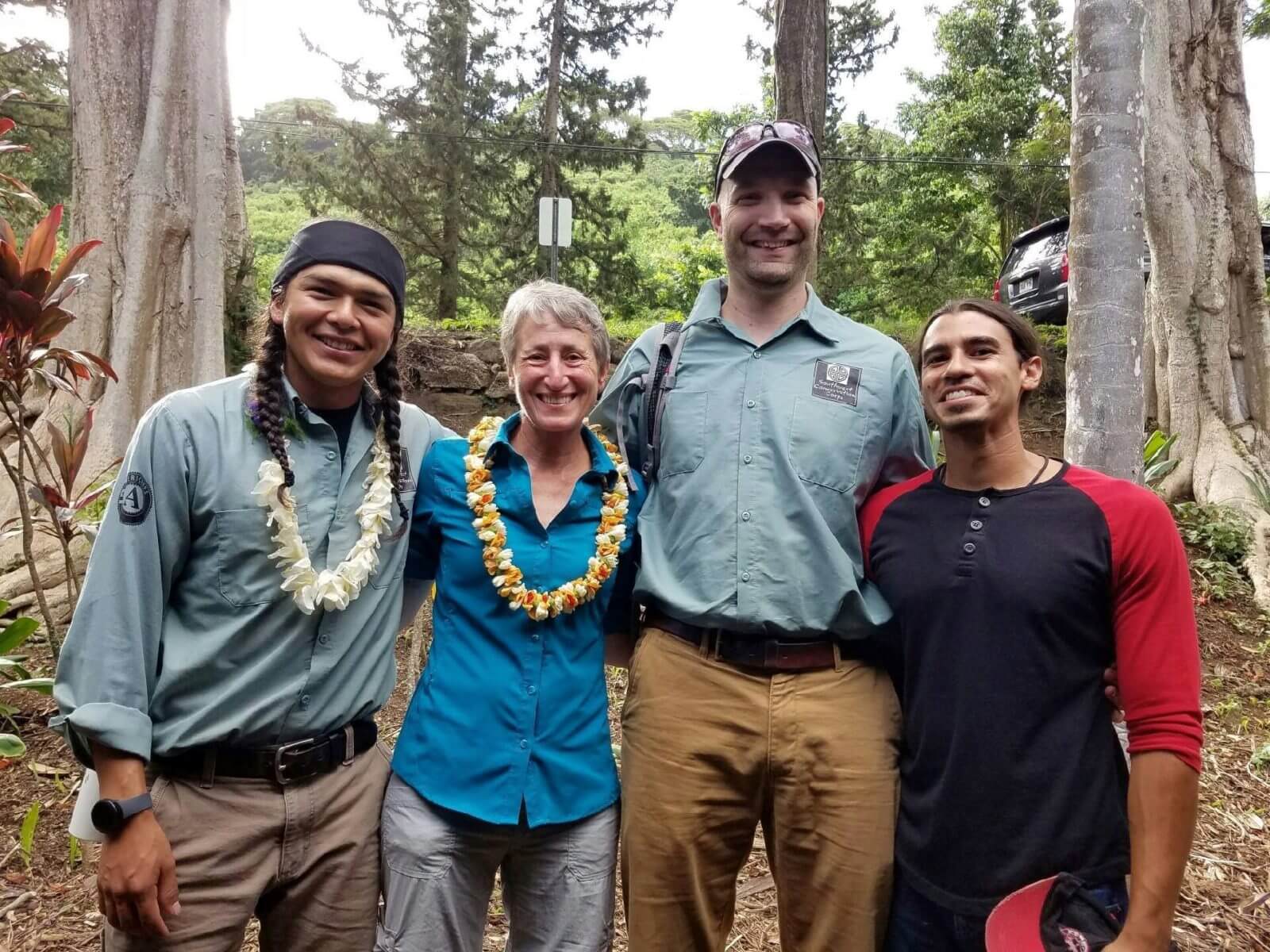 Figure 2 – Southwest Conservation Corps Ancestral Lands staff and alumni with Secretary of the Interior Sally Jewell at the 2016 International Union for Conservation of Nature, World Conservation Congress in Honolulu, Hawaii.

The overall purpose of Conservation Legacy’s tribal in-community approach is to build a solid foundation for creating sustainable “Native-led” programming within tribal communities across the United States. Conservation Legacy supports the self-empowerment of Native communities through the further development of program models that provide jobs and valuable work experience for Native youth and young adults throughout Indian country. These models also connect Native youth to their heritage and cultural values; complete important conservation work on tribal lands, public lands, and within local communities; and expose Native youth to potential careers in conservation and protected area and public land management.

Conservation Legacy established their first Ancestral Lands tribal in-community program in 2008 based at the Pueblo of Acoma (New Mexico) and has supported the expansion and replication of that program. Conservation Legacy’s all-Native tribal community programs complete projects that include, but are not limited to, traditional farming, wash and river restoration, invasive vegetation inventory and monitoring, Russian olive and salt cedar removal, fuels mitigation, wilderness character monitoring, wildland and Native community trail construction and maintenance, land and historic building preservation, park and facility improvement, and cultural/language revitalization.

The Acoma Pueblo tribal in-community partnership annually employs 35 to 40 primarily tribal young people each summer. Acoma youth crews complete work on tribal lands in areas such as community parks and forests within Acoma tribal boundaries. Projects can also be nonconservation focused on the elderly and/or on improving low income–based housing. All work is prioritized by what the Acoma people believe are the most necessary projects that conserve, restore, and preserve the environment of their community.

“The Southwest Conservation Corps has been a huge asset to our community at Acoma Pueblo. In addition to the summer program for young children, they are doing important work in the community to engage our elders to pass down traditional knowledge and responsibilities to our young people. The SCC and community staff are extremely well trained and passionate about their work to build the future leaders of our community. Our Acoma people stand behind them and are hopeful that they can receive the resources they need to grow and build their capacity in the coming years.” -Keegan King, Corpsmember Parent/Acoma Elder

“The work we do in the field is tough and grueling, but at the end of the day we’re camping out in the wilderness with fellow tribesmen working to help our environment. It connects directly to what we believe in as Indian people and fulfills what a lot of us are missing in our everyday lives. It’s no surprise then that many of us have seen and felt such transformative experiences on the crew, fallen in love with the program, and devoted ourselves to continuing this work. …” -Anthony ‘Chako’ Ciocco, Southwest Conservation Corps’- National Ancestral Lands Program Coordinator

Another example of Conservation Legacy’s successful tribal in-community programs is the White Mountain Apache Youth Corps program. This Native youth corps effort is based out of White Mountain, Arizona and provides young adults ages 18-25, many of whom are disconnected from their community and local economy, with an outlet for their tremendous energy and the opportunity to do something that matters for and with their home community. Along with being taught about conservation work, participants also learn teamwork, leadership, conflict resolution skills, environmental stewardship, personal responsibility, their tribal heritage, and what the land means to the White Mountain people. 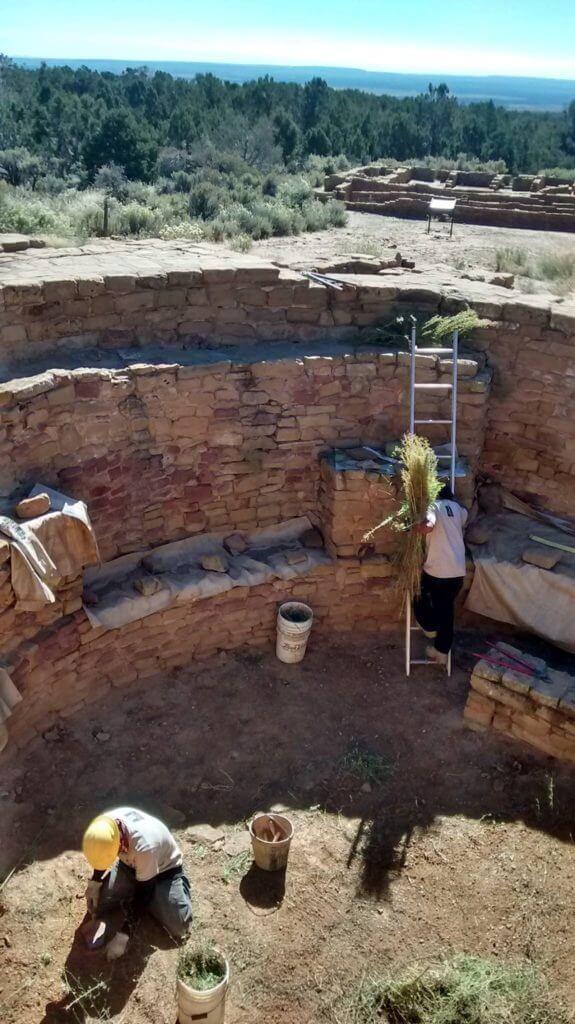 In 2016 and 2017, AZCC Phoenix intertribal crews worked in the Superstition and Mazatzal Wilderness units of the Tonto National Forest completing high-priority trail maintenance and renovation backlog projects. These crews also participate in local tribal community team-building and service projects in an effort to expose corps members to day-to-day tribal operations as well as to enhance existing relations between AZCC and local tribes. 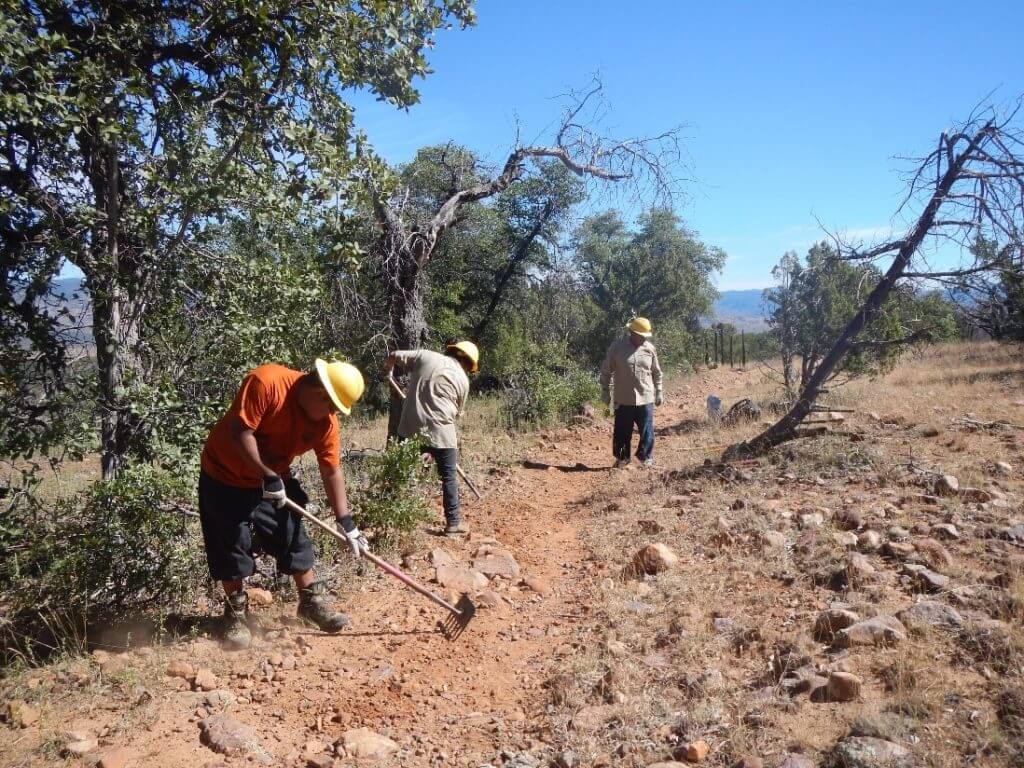 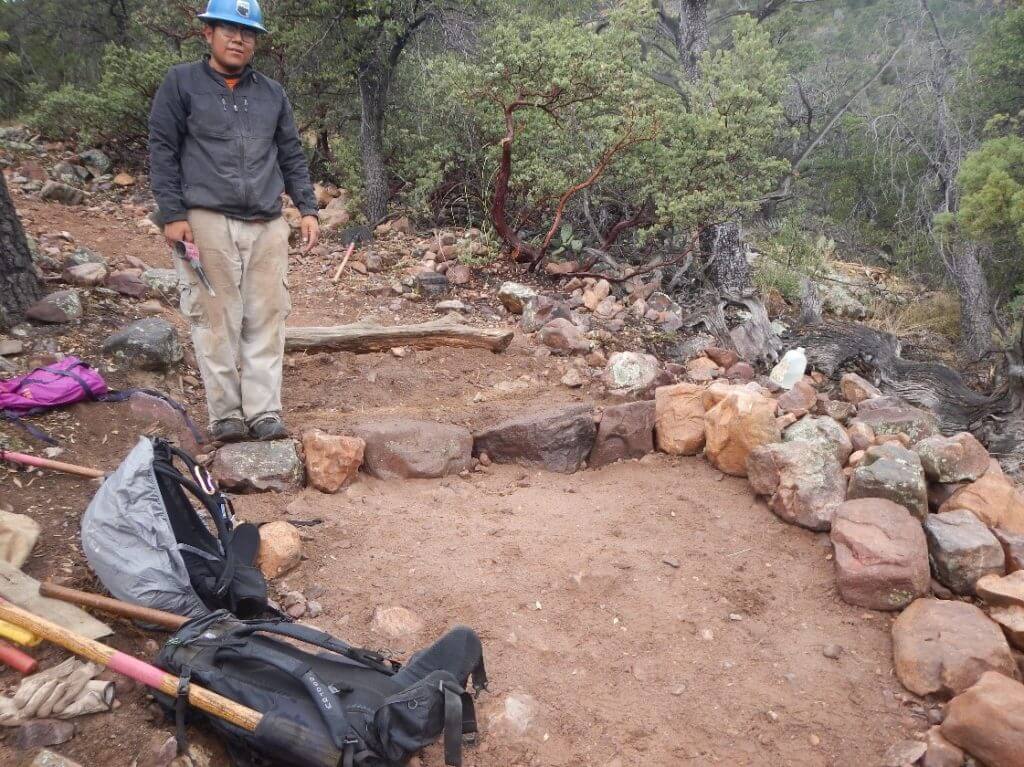 In 2016, La Plazita Institute partnered with Conservation Legacy to field one 12-person Intertribal/Latino inner-city crew based in the south valley communities of Albuquerque, New Mexico (USA). This crew worked at Petroglyph National Monument installing firebreaks and growing produce for local families, accrued more than 2,400 work hours, and made many positive impacts upon their community. This is a keen example of how Conservation Legacy has taken their basic Native program model and fine-tuned it to meet the needs of a specific community and that community’s diverse youth demographic.

“The whole overall experience is awesome! Not only do you get the feeling of accomplishing something as a crew, but also personal accomplishments of self-set goals.” -Marcus Newood, Arizona Conservation Corps – Phoenix Native Crew Member

“I loved the experience and being a crew leader for the first time gave me a new outlook on the job. ‘Sometimes you have to be blindly sure of yourself to not instill doubt in your crew.“ -Juan Armenta, Arizona Conservation Corps- Phoenix Native Crew Assistant Crew Leader

US federal agencies should not be left out of the conversation of serving Indigenous youth. The Bureau of Indian Affairs (BIA) has partnered with Conservation Legacy’s Ancestral Lands program to complete many projects to benefit the Navajo Nation. The National Park Service has also been a key partner in supporting, expanding, and replicating CL’s Native youth program. The US Fish and Wildlife Service hosts a variety of Native youth programs and internships, and for years the US Forest Service has provided American Indian young people the chance to work outdoors and to learn about careers in conservation through their Youth Conservation Corps (YCC) and Young Adult Conservation Corps (YACC) programs. Thus, it is through this combined NGO and federal agency commitment that young people coming from dozens of tribal groups around the country are now being exposed to the world of conservation and protected area management.

Leading Our Nation Back to Ecological and Cultural Well-Being

Much can be said about how far we have come regarding working with our Native populations on the intricacies of managing protected areas, and working with Native youth is certainly a prime example, as illustrated above. Native youth engagement not only delivers huge payoffs to our Native youth and public lands, it also ultimately fosters the building of positive relationships that absolutely must exist between Native peoples and public land managers/users moving forward.

However, the real work has just begun in terms of how consistently managers choose to include and effectively “listen to” our Indigenous partners on issues that affect the proper planning and stewardship of public lands. Yet it may be in the words of our young Native people themselves that speak loudest about how the Native youth corps experience can positively formulate the outdoor/professional lives of Native young people for the coming generations … thus constructing the very foundation needed … to build meaningful and lasting relations with our important tribal community neighbors.

GREGORY HANSEN worked in tribal relations at the Forest and Regional levels for the US Forest Service and currently serves as the statewide tribal relations coordinator for the Arizona Conservation Corps; email: redroadone@aol.com 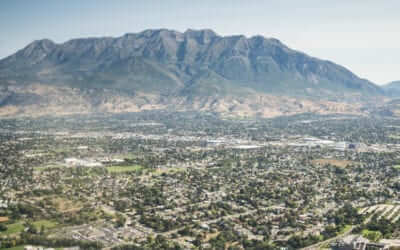 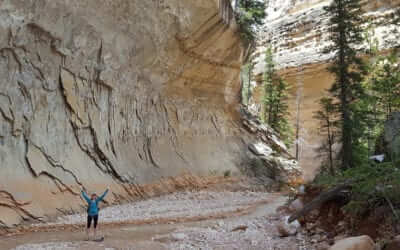 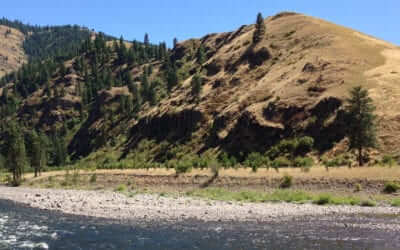 Examining Satisfaction and Crowding in a Remote, Low Use Wilderness Setting: The Wenaha Wild and Scenic River Case Study

The purpose of this case study was to collect data about summer recreational use of the Wenaha WSR to help managers better understand visitor use and attitudes related to use capacity.